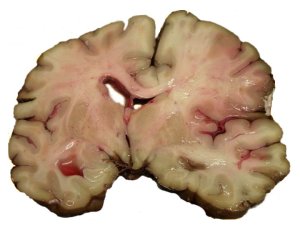 It might sound like something out of a cheesy sci-fi B-movie (or indeed a Steve Martin comedy classic), but keeping brains alive is an important business for some real scientists, not just Dr Frankensteins.

A team of scientists from Australia have come up with a new technique that can keep slices of rat brain alive for up to 3 days – using UV light and a cooler.

So, what’s the point?

While brain slices may sound like something Hannibal Lecter would put in his sandwiches, they are actually an important tool in studying how the brain works.

If thin slivers of grey matter (known as acute slices) are removed from the rest of the body, it allows small clusters of brain cells to be experimented on in a tightly-controlled environment without interference from other bodily processes. It also allows microscope images to be taken that would be difficult of impossible if the brain was whole.

The method does have its drawbacks: the animal providing the sample must of course be ‘sacrificed’ (meaning euthanised, rather than killed as an offering to mighty Zeus), and the isolated brain sections will not be subject to normal biochemical and electrical stimuli and so may react differently to how it would in the body.

Nevertheless, it it a technique that has arguably led to important advancements in the understanding of brain functions and the ‘molecular and cellular machinery that is defective’ in a number of neuropsychiatric diseases. 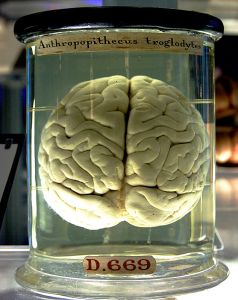 However, an important limitation in the use of brain slices is that they age and die quickly – typically within 6-12 hours. Keeping slices alive for longer will mean that a broader range of experiments can be performed on them, and better data can potentially be obtained (since the cells degrade more slowly).

It could also mean that more data can be obtained from each slice, so fewer animals need be killed. This is an important consideration ethically (yes, some scientists do actually have morals), and in terms of cost – both to time and to money.

What did they do?

Brain slices are typically stored in a liquid (or ‘incubated in a medium’ in science lingo). Typically, the medium contains food (glucose) and oxygen in order to help keep the cells alive for as long as possible.

But the researchers reckoned that bacteria could be responsible for cell death too. Unfortunately, while the medium is essential for keeping the brain cells alive, it is also an environment in which bacteria will thrive. The poor brain cells are almost defenceless against the bacteria (because they’re no longer hooked up to the rat’s main immune system), with only some glial cells able to fight them off.

So they researchers looked for ways to control the bacterial population. They ruled out antibiotics, since they could also effect responses in the brain cells and therefore potentially compromise experiments.

Instead, they used an ultraviolet (UV) light to hinder the growth of the bacteria. UV light at a particular wavelength (254nm) can damage DNA (by breaking double bonds in thymine residues, forming dimers). This disrupts the bacteria’s reproductive and cellular processes, hindering their ability to survive and multiply.

However, while microorganisms are more susceptible to UV damage than humans, exposing the brain slice to the UV would likely cause damage to the brain cells too.

To get around this, the scientists came up with a clever solution: They built an incubator (brilliantly named the ‘braincubator’) consisting of two chambers. The brain slices were kept in one chamber and the UV lamp in the other, but the medium was circulated between the two.

This means that the bacteria (most of which are expected to be floating around in the medium) will be exposed to the UV light periodically, while the brain slices remain shielded from it.

They then kept brain slices in their ‘braincubator’ to see how long they lasted compared to slices in a regular (control) chamber. They added a fluorescent marker that indicates the presence of dead cells (it actually binds to nucleic acids, but is generally excluded from living cells by their membranes). They also counted the number of bacteria in samples of both brain slice and medium.

The scientists also cooled the medium in the ‘brainculator’ to 15-16oC. Both bacterial and brain cell metabolism would be expected to slow down at lower temperatures, extending the lifespan of the brain slices. The control was kept at room temperature (~22oC).

Did they prove anything?

They observed little difference in cell survival rates between the two sets of samples after 1 hour (~73%), but after this time the cells in the control sample began to die off quicker than the ‘braincubator’ cells.

After 24 hours, the proportion of living cells in the control had dropped below 20%, while in the ‘braincubator, it remained over 40%. After 36 hours only around 5% of the control sample cells remained viable, while around 30% of the ‘brainculator’ cells were still alive and kicking. 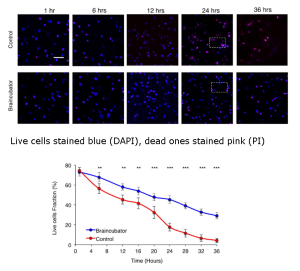 So, what does it mean?

The ‘braincubator’ improved the survival rates of the cells in the brain slices, which is ultimately what the researchers set out to do. The fact that as the bacterial population went up, the brain cell count went down, lends weight to the idea that controlling bacterial growth was the reason for the ‘braincubator’s success.

One criticism that can be levelled at this study is that while they proved that a combination of UV-exposure and cooling of the medium prolonged the survival of the cells in the slices, it is impossible to say how much of an influence each of these factors has.

It would have been relatively simple to conduct a parallel experiment where either the ‘brainculator’ was used at room temperature (UV only) or where brain slices were incubated at lower temperature but no UV (low temperature only). This would allow the relative effectiveness of UV and low temperature to be told apart from one another.

Of course, limited time and resources may be legitimate reasons for not conducting a further experiment and may well be an area of future study.

But essentially the experiment appears to have been a success and the ‘braincubator’ is a clever solution to the problem of bacteria in the sample. Similar devices could also be used in other experiments where bacteria are a problem so it could make a difference in other fields of study too. 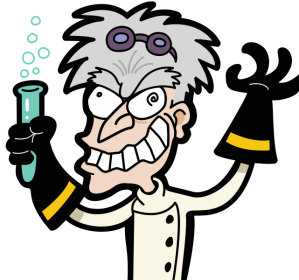 Not all scientists keep brains in jars, but for those that do the ‘brainculator’ could well prove to be a useful piece of technology for their plans, diabolical or otherwise.

Text © thisscienceiscrazy. If you want to use any of the writing or images featured in this article, please credit and link back to the original source as described HERE.